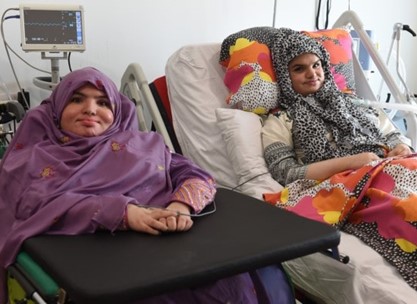 Gulf News reporter Noor Nazzal came to visit Amana Healthcare, Abu Dhabi in search of an inspiring story of resilience and hope. The following is what she wrote as an account of her visit:

With their voice barely audibly over their loud life-support machines, three Emirati women prove they can make the most of their lives, regardless of how extreme their condition or short their life expectancy.

Twenty-year-old Asma Al Mansouri and Abeer, 34, were both diagnosed at a young age with muscular dystrophy, a hereditary condition that causes progressive weakness and loss of muscle mass. As a result of their condition, Abeer and Asma’s bodies have gradually become paralysed, except for Asma’s left hand. They are also dependent on ventilators to breathe and have an average life expectancy of 35 to 37 years.

Having this condition meant that they had to spend much of their lives inside the four walls of hospital rooms, rarely getting to practise regular activities like going to the mall or going out for a walk. This all changed, however, after they moved to Amana Healthcare in Khalifa City, Abu Dhabi, whose strategy not only revolves around giving patients the physical care they need, but also aims to improve their psychological state by giving them a chance to participate in normal life activities regardless of how extreme their case is.

“Asma couldn’t even talk or eat solids when she came here because the previous hospital only gave her liquid foods. When she came here we trained her to do so. She was happily surprised now that she can eat and talk. Her left arm is also functioning so we got her an electric wheelchair that allows her to move on her own,” Dr Mosab Mounneh, anaesthesia and intensive care specialist, told Gulf News during the visit. Mounneh said improving the psychological state by helping them take part in daily activities or by going out to the garden or mall is important. “If you are locked in a hospital room, how would you feel? It can cause patients to feel stressed and that, in turn, can cause complications like hypertension, depression and heart problems, to name a few,” he said.

“It feels like home here, not a hospital. There is assistive technology that allows me to put on the AC and the TV with my eyes. They are currently training me to use it. I also love drawing and talking to my family on social media,” said Asma, who two months ago was not able to speak. Abeer, on the other hand, has a passion for cooking and dreams of opening her own restaurant. “I would memorise the recipes from cooking shows on TV and then tell my helper or sometimes my mother what to do. I also hope to start memorising more verses of the Quran and dream of meeting the Crown Prince of Abu Dhabi [His Highness Shaikh Mohammad Bin Zayed Al Nahyan],” she said.

In another attempt to involve the sisters in a new experience, Fatima Al Mulla, an Emirati graphic designer turned fashion designer, visited the hospital to create clothing based on the sisters’ vision. “I jumped at the opportunity to give back to the community. Everyone has potential. Just because you are a person with disability does not mean you don’t have an opinion or a sense of style. Each sister had a different outlook. Asma wanted a dress for her brother’s wedding, while Abeer wanted an abaya with a matching bag and shoes. The final pieces will be on display at The Galleria mall in Abu Dhabi,” she said,

Abeer, who was designing a dress for the first time in her life, said she was excited to take part in the experience. “I love the sea so I chose a blue layered abaya to resemble the ocean along with pearl accents. I am excited to see the outcome,” she said. Before becoming an Amana Healthcare patient, Emirati Mariam Al Ali, who also suffers from muscular dystrophy, spent a number of years in the ICU, watching people around her die. This, however changed after becoming an Al Amana Healthcare patient, as staff say she has become part of the facility’s family. “I attend the meetings at the hospitals and teach the nurses Arabic. I am currently visiting a religion learning centre and have memorised seven surahs from the Quran,” she said. Mariam, who has become an active member of society, has visited malls and garden and even gave a speech at a conference. She also told Gulf Newsexcitedly that she will be going to the Formula One race in Abu Dhabi.

“I now have another hope. Life is better now,” she said.